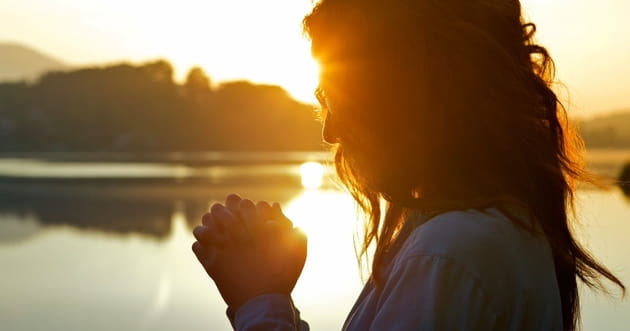 Do you ever get discouraged in prayer? Have you prayed and prayed for something, but aren’t seeing answers from the Lord that you would like to see?

If so, here are seven Biblical reasons that will encourage you to pray and not lose heart.

1. God has promised to give us anything we ask according to His will.

First John 5:14 contains the Lord’s promise that, if we will ask Him for things that line up with His will, His answer will be “yes!” This passage says:

“Now this is the confidence that we have in Him, that if we ask anything according to His will, He hears us.”

So how do we learn what God’s will is, so we can ask properly? By studying His Word. The Bible contains thousands of promises that clearly tell us how our Father wants to bless us, provide for us, comfort us, heal us, take care of us, and—most importantly—draw us closer to Jesus.

Our Father is the Giver of good and perfect gifts (James 1:17). He won’t withhold any good thing from those who walk uprightly (Psa 84:11). And because He is kind and good, He delights to dump good gifts on us, His children!

So don’t lose heart! Make sure your prayer lines up God’s Word, then ask away—and keep on asking!

2. Your prayers are so important to God that He stores them in Heaven.

Revelation 5:8 tells us, “Now when He had taken the scroll, the four living creatures and the twenty-four elders fell down before the Lamb, each having a harp, and golden bowls full of incense, which are the prayers of the saints.”

Did you get that? Your prayers are so important to God that He actually keeps them in Heaven. They are like perfume to Him; their fragrance ascends to His nostrils!

What’s the application? Even if you pray and Father God seems like He’s not answering, He hasn’t ignored you! Your prayers have staying power! And at just the right time, the Lord will “pull the trigger” and bring you the answer you need.

3. Persistent prayer is a demonstration of your faith.

Some folks will try to tell you that you should only pray for a thing once; thank God in advance for answering; and then stop praying about that thing. Those people mean well, but don’t follow their advice! Why? Because Jesus Himself said that faith-filled prayer requires persistent asking.

“Then He spoke a parable to them, that men always ought to pray and not lose heart, saying: ‘There was in a certain city a judge who did not fear God nor regard man. Now there was a widow in that city; and she came to him, saying, ‘Get justice for me from my adversary.’ And he would not for a while; but afterward he said within himself, ‘Though I do not fear God nor regard man, yet because this widow troubles me I will avenge her, lest by her continual coming she weary me.’’

Then the Lord said, “Hear what the unjust judge said. And shall God not avenge His own elect who cry out day and night to Him, though He bears long with them? I tell you that He will avenge them speedily. Nevertheless, when the Son of Man comes, will He really find faith on the earth?”

Jesus told this parable of the unjust judge so that people would always pray and not lose heart. The woman He described never stopped asking. She drove the judge crazy with her requests!

After Jesus told this woman’s story, He pointed out that God will do much more for us when we cry out day and night to Him! Then, however, Jesus asks the big question: when He returns, will He find us demonstrating our persistent faith by our persistent asking?

I want Jesus to find that kind of faith in me when He returns. Don’t you? If you do, keep on praying! Go ahead and pester our Father with your requests night and day! That kind of praying is pleasing to Him.

4. When times are at their worst, God’s prescription is to fast and pray.

Joel 2:15-17 says, “Blow the trumpet in Zion, consecrate a fast … Let the priests, who minister to the Lord, weep between the porch and the altar; let them say, ‘Spare Your people, O Lord, and do not give Your heritage to reproach, that the nations should rule over them. Why should they say among the peoples, ‘Where is their God?’’”

Times are hard for many people right now. However, God’s prescription for getting help and seeing change is the same as it has always been: fasting and prayer.

When we pray and fast, God moves Heaven and routs demons. So if the enemy is coming against you like a flood, win the battle by praying, fasting, and praying some more! You will see change when you do.

5. Because the Bible says to pray without ceasing.

1 Thessalonians 5:17 tells us to “pray without ceasing….” This verse by itself is so encouraging when we are tempted to abandon our prayers! Father knew we would be tempted to stop praying sometimes. However, He wants us to keep on asking—so He gave us an express command to keep on keeping on!

6. We receive nothing if we doubt.

James 1:6-7 tells us that a person who doubts won’t receive anything from the Lord. That’s reason enough to keep praying in faith!

If you’ve been praying for something a long time, don’t let the enemy discourage you! Your prayers are working! And if you keep on asking, you will receive (Matthew 7:7).

7. God is not unjust to forget your work. He will reward you!

“For God is not unjust to forget your work and labor of love which you have shown toward His name, in that you have ministered to the saints, and do minister. And we desire that each one of you show the same diligence to the full assurance of hope until the end, that you do not become sluggish, but imitate those who through faith and patience inherit the promises.”

God, whose throne is founded on righteousness and justice, considers it unjust to forget you and all the work you have done. He would never be unjust or unrighteous; He cannot deny Himself. Therefore, He would never forget your labor, your prayers, or your ministry. He remembers you, and He will reward you! He is moving on your behalf right now. Through faith and patience, you will inherit the promises!

Has the enemy been tempting you to give up and stop praying? If so, don’t listen! Keep on praying, and don’t lose heart! God treasures your prayers. They matter to Him, and He will move on your behalf at just the right time if you do not give up!

Jamie Rohrbaugh is an author, speaker, and Presence seeker whose heart is for the local church. Called to edify, encourage, and equip the Body of Christ, her passion is to see sons and daughters of all ages transformed by the love of Abba Father. Jamie blogs at FromHisPresence.com® about prayer, revival, and the manifest presence of God. She is the author of four books and of numerous articles around the web. Jamie is a grateful member of the Redbud Writers Guild. She and her husband live in Chattanooga, Tennessee, and together they have one cat. Follow her on Pinterest, Facebook, or Twitter.

This content first appeared on iBelieve.com and is used here with permission. To view the original visit: http://www.ibelieve.com/faith/7-reasons-to-pray-and-not-lose-heart.html